As promised in my recent blog about the portraits at Buckingham Palace, here’s a few thoughts on the fabulous Queen’s Gallery.

Having undergone a significant expansion, the gallery was reopened in May 2002 as part of the Queen’s Golden Jubilee Celebrations and now displays treasures from the Royal Collection.

Currently showing at the Queen’s Gallery is an exhibition showing how the garden has been celebrated in art over the past four centuries. Entitled Painting Paradise: The Art of the Garden, the exhibition runs until Sunday 11th October 2015 and is well worth a visit. Anyone with an interest in botanical or landscape art should particularly enjoy the collection while I was delighted to find a number of portraits featured.

Portraits in the Queen’s Gallery

Two of my favourite portraits shown in the current Painting Paradise exhibition both happen to utilise an oval shaped canvas. Firstly, a romantic painting by the famous 18th century artist, Thomas Gainsborough. Entitled Henry Duke of Cumberland with the Duchess of Cumberland and Lady Elizabeth Luttrell, I love the atmosphere created by the dense trees reaching up to the almost obscured sky. The detail and accuracy of the faces helps draw the viewer’s eye in contrast to the looser painterly brushstrokes used throughout the rest of the artwork. 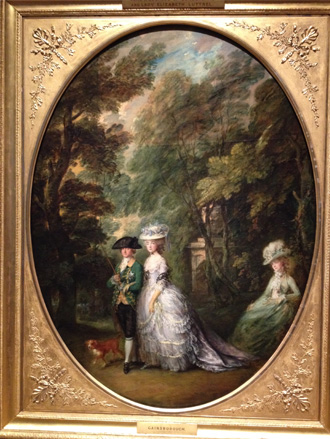 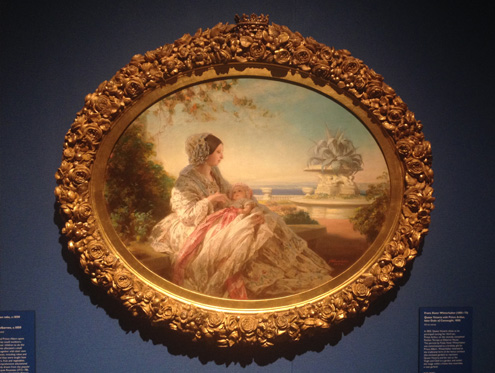 The second oval shaped oil painting that stood out was by Franz Xaver Winterhalter and features Queen Victoria with Prince Arthur, later Duke Connaught. I’m a big fan of the way the artist has created such an impression of depth in the fabric of Victoria’s and Arthur’s clothes with the confident flashes of white contrasting against the earthy tones of the material. This technique works particularly well for the Queen’s muslin and ribbon cap, creating a real pocket of interest that grabs attention. 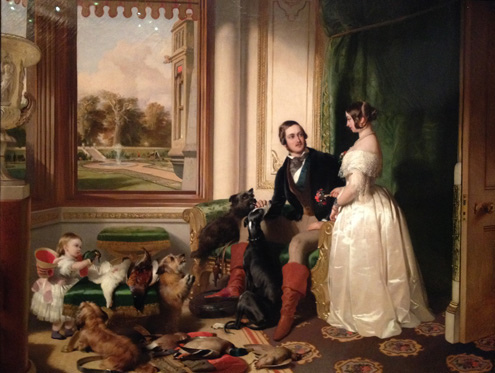 One of the fabulous group portraits on display was the large (113.4 x 144.3 cm) oil of Queen Victoria, Prince Albert and Victoria Princess Royal by Sir Edward Landseer. Painted between 1840 and 1843, in the first few years after the royals wed, the piece shows Prince Albert returning to Windsor Castle after a day shooting. Set in a drawing room, the trio is shown in a busy scene including four dogs and a variety of game.

All three of the royals are depicted with perfect ‘porcelain doll like’ complexions which really stand out against the variety of other textures that are expertly captured within the painting. From the drapery of the curtains and upholstery of the furniture through to the wood paneling of the door and coats of the dogs, there is a real array of texture in the piece. I’m particularly impressed by the texture of the velvet of Albert’s jacket and lace of Victoria’s dress, as I recently attempted to replicate both materials in my portrait of a High Sheriff.

The Garden Party at Buckingham Palace

Finally, I have to make a special mention of the amazing detail demonstrated in a painting by Laurits Regner Tuxen. Documenting the Garden Party at Buckingham Palace, 28 June 1897, this large piece is spectacular. The artist has managed to capture the dense crowd so well that you could study this work for an hour and still keep finding fabulous details. I particularly like the artist’s use of light and shadows in the piece. 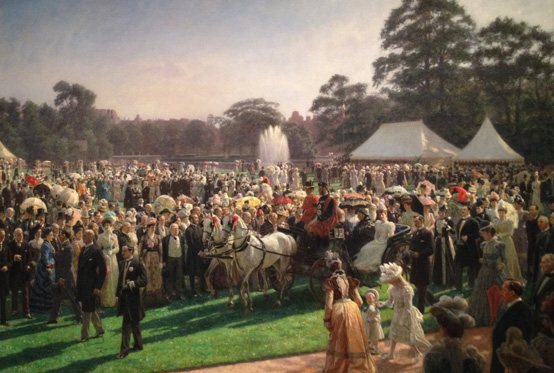 If you missed my first blog discussing some of my favourite portraits of the Royal Collection you can read it here.