The Royal College of Surgeons of Edinburgh

As I discussed in my last post, I was recently lucky enough to attend a ceremony at the Royal College of Surgeons of Edinburgh.

The portrait collection on display there was fantastic but so too was the Playfair Building, a beautiful neo-classical building designed by the great Scottish architect William Henry Playfair.

Better known for his designs of the National Gallery of Scotland and the Royal Scottish Academy, William Henry Playfair is described by Edinburgh Architecture as a leading figure in Edinburgh’s Enlightenment.

The building is home to some fabulous wood paneled rooms in particular the Fellow’s Library.

However the most impressive part of this Georgian building for me was easily the ceiling of the Playfair Hall. Featuring an intricate glazed copular and beautiful floral and fruit decoration I could get lost in the detail.

The photos I took (shown below) help illustrate some of the fabulous detail of the ceiling while the Surgeons Hall website features a video which gives a great overview of this super Scottish venue. 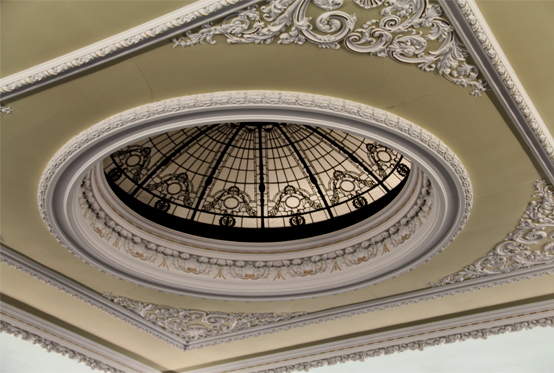 Fantastic detail of the ceiling in the Playfair Hall

Floral and fruit detail of ceiling decoration in the Playfair Hall