The Person in the Portrait

I thought it might be quite interesting, where possible, to provide a brief description of who features in my portraits along with some detail on the painting process involved. First up, a military portrait of a British Army Major…

Major Philip. E. Bradshaw T.D. served as a British Army Nurse in 208 Field Hospital (V) in a career which lasted nearly 20 years and for which he was awarded the Territorial Decoration.

He served operationally in Iraq in 2003 and Afghanistan in 2007 where he worked tirelessly with fellow medics to treat the wounded.

Major Bradshaw’s nursing specialty is accident and emergency nursing and much of his time was spent working as a trauma team member in resuscitation. He is very proud of the determination and dedication displayed by all ranks caring for casualties in often harrowing and arduous situations.

Major Bradshaw was presented with the portrait on his 60th Birthday earlier this year and the veteran spoke of his delight upon receiving the portrait;

“Well what can I say? It’s amazing. I haven’t been able to stop looking at it. I look back at my time in the forces with great pride and I believe the portrait captures that feeling of pride perfectly. It’s a work of art which will be treasured by my family and I hope will be around long after I’m not.”

I thoroughly enjoyed creating this piece. The portrait was carefully planned as I wanted to capture the finery of the uniform while ensuring that an excellent likeness of Major Bradshaw was achieved. 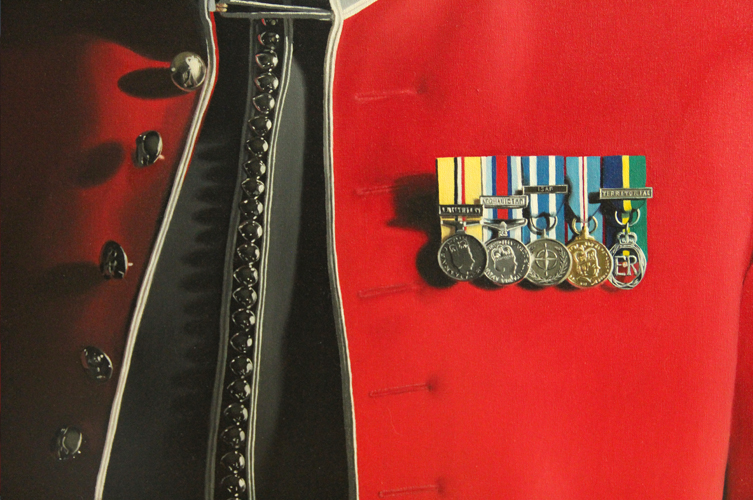 I began by making a number of preliminary sketches and took reference photos before completing the painting over a four-month period.

The detail and reflections on the buttons, medals and Qaranc badge on the cap were a challenge but a fun one and I’m delighted with the outcome.