The prints feature a still life arrangement of objects that belonged to the legendary Wizard of Dribble:

The prints are 55.6 x 45.5cm in size and are currently available to buy through my online shop with Free UK Delivery.

20% (£15) of every sale will be donated to the Sir Stanley Matthews Coaching Foundation to help support their brilliant work completed in the memory of one of football’s greatest ever players.

The prints are based on an original oil painting which I painted from life as part of a residency at the National Football Museum.

Read on to find out how I painted the still life or head over to my shop to order your signed print from the edition of 53. 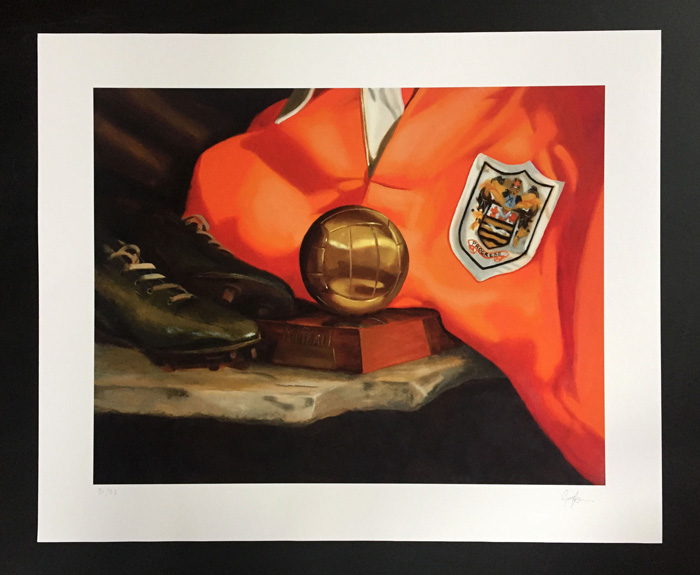 The Creation of the Painting

The Sir Stanley Matthews Still Life was painted over a week long residency at the National Football Museum in Manchester where I had the pleasure of painting the original Stanley Matthews objects from life.

Entitled Score Draw, the residency tied in well with the Football Museum as part of their Football is Art project and coincided with the Big Draw Festival 2018.

After numerous meetings and conversations about the residency it was decided that I should paint objects relating to my beloved Blackpool FC and in particular one of Blackpool’s, and indeed one of football’s, greatest ever players… Sir Stanley Matthews.

The preferred objects for the painting are all loans to the museum from kind private individuals. Thankfully each owner was happy for us to feature the objects within the still life painting and of course we treated the items with great care and respect.

The featured Stanley Matthews objects were:

Being able to paint these objects from life, as a Blackpool fan I had to pinch myself on a few occasions!

The shirt and boots were what Sir Stan wore in the now legendary ’53 Final, often referred to as the Matthews Final. While another Blackpool legend – Stan Mortenson scored a hat trick in the game, the Seasiders came from 3-1 behind to win 4-3 with Matthews proving instrumental in the come back. The win meant that Matthews had finally won a cup winners medal after falling short in previous years.

In 1956 Sir Stanley Matthews was recognised as the best footballer in Europe, being awarded the inaugural Ballon d’Or.

The objects were chosen not just for their historical significance but because I envisaged that they would look great arranged and lit as a still life. As you can see from the reference photo below, taken by the team at the National Football Museum, grouped together they looked stunning. 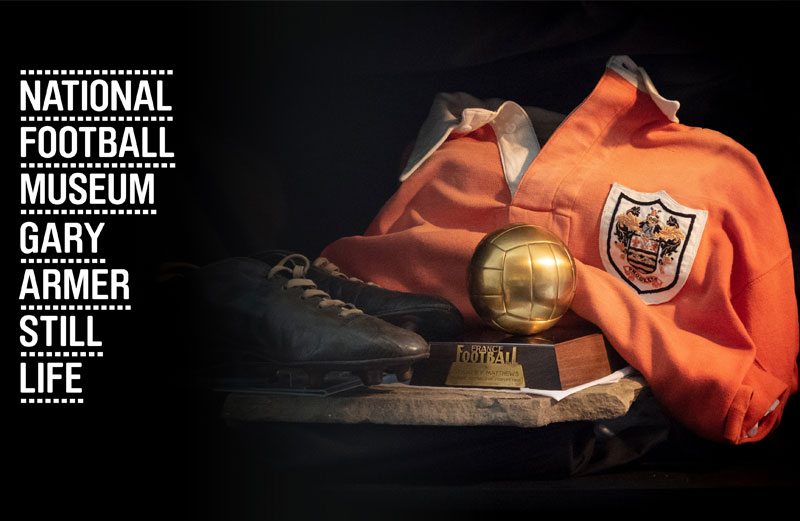 Ahead of the residency I completed a “dummy run” with the team at the museum that allowed us to carefully plan the composition and logistics of the week. The arrangement came together exactly as I envisaged and after taking some reference photographs I was excited to get started on the piece!

Back in the studio I quickly sketched a colour study in oils on canvas paper to help work out my colour strategy for the painting. Having painted in front of a live audience before I knew how important it was to prepare as much as possible and these colour notes proved to be a real help during the residency. 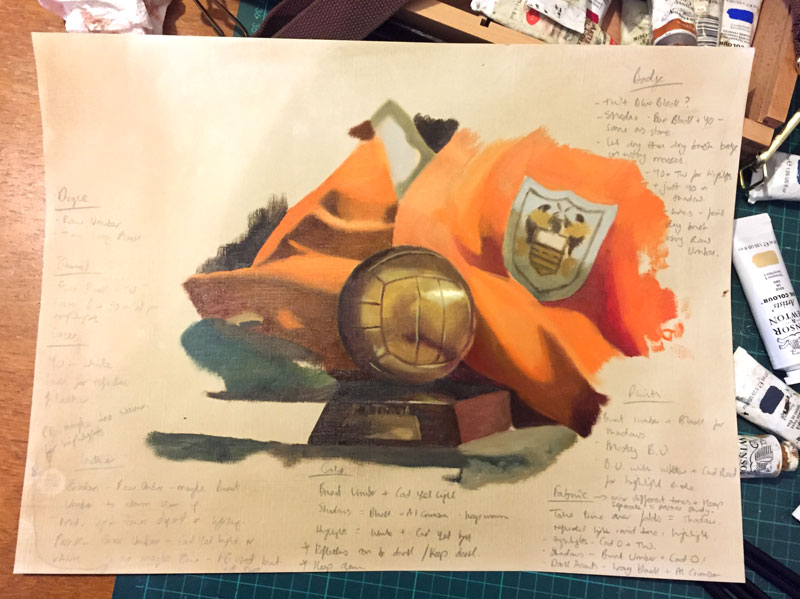 You can hear me discussing the residency in this teaser video created by the museum:

The Painting in Progress

The residency lasted for 5 days across which I managed to paint the still life from start to finish. I painted in oils on canvas using the sight-size technique.

The painting was more of a challenge than normal however as each evening, understandably, the objects were carefully taken down from the plinth and stored in a more secure part of the museum. The following morning, the excellent museum staff would then help me recreate the composition before I could start painting again.

In the gallery of progress photos below you can see how I began on the Monday with the initial drawing in Raw Umber before blocking in the main masses of the painting on the Tuesday.

I felt better when I had worked across the entire canvas and could start finding the different values more accurately.

On the Wednesday I painted the Ballon d’Or alla prima before adding details of the badge on the Thursday. Before finishing on the Thursday evening I made a to do list of what I still wanted to get through on the piece ready for my final day of the residency.

The Friday was good fun as I painted the France Football details of the Ballon d’Or trophy and added other details and highlights to the shirt and boots.

Like most paintings I could have spent longer on the piece but overall I was delighted to take the painting to the finish I achieved. 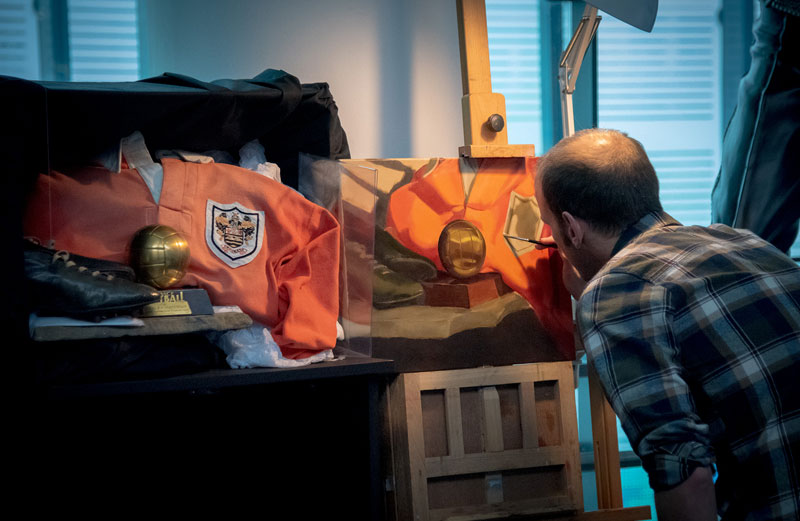 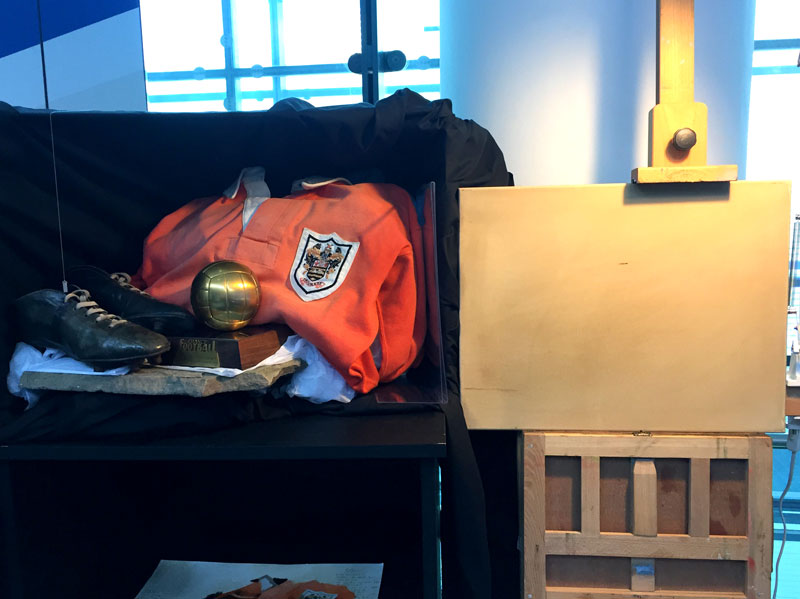 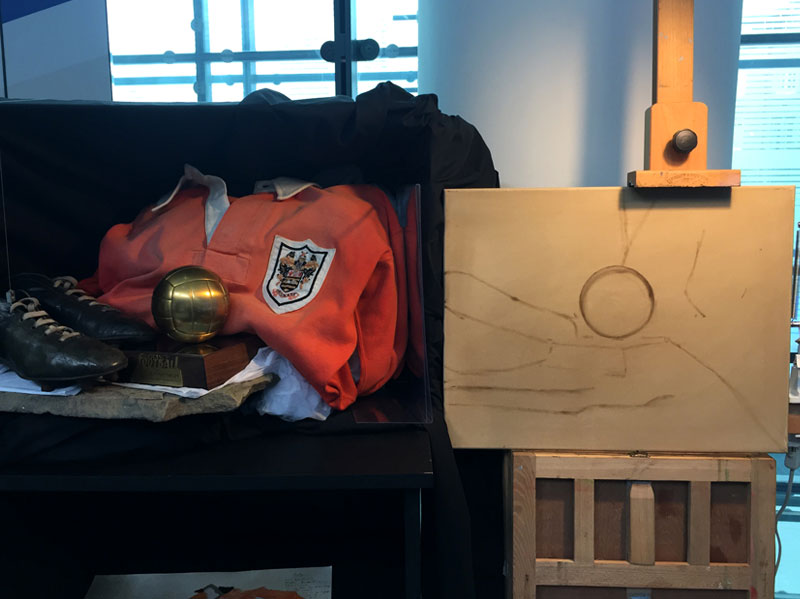 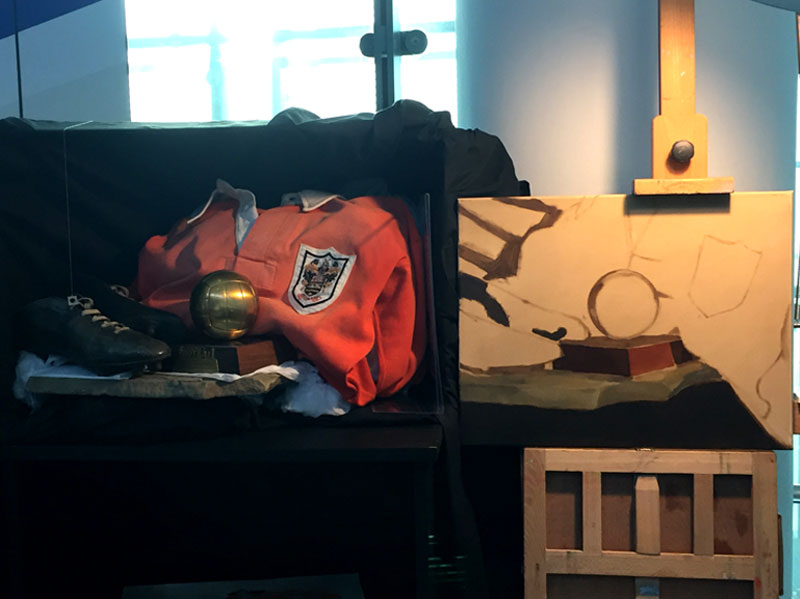 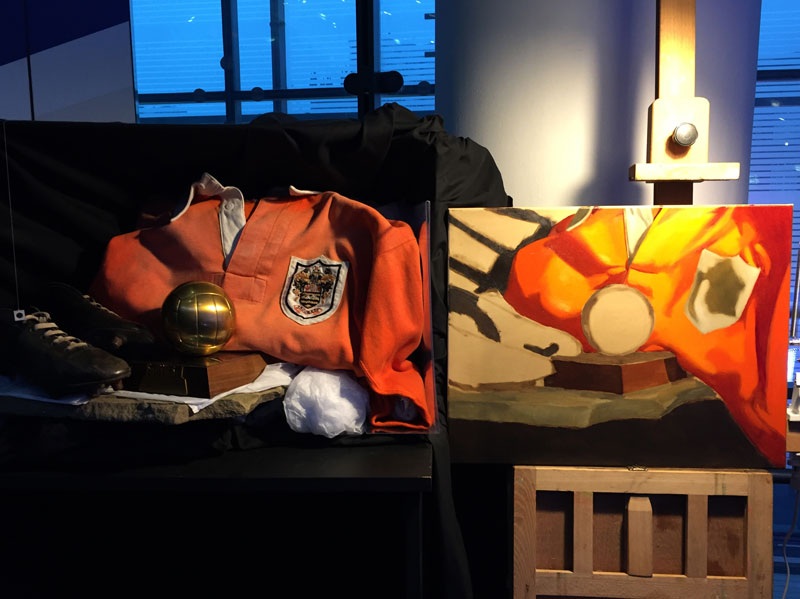 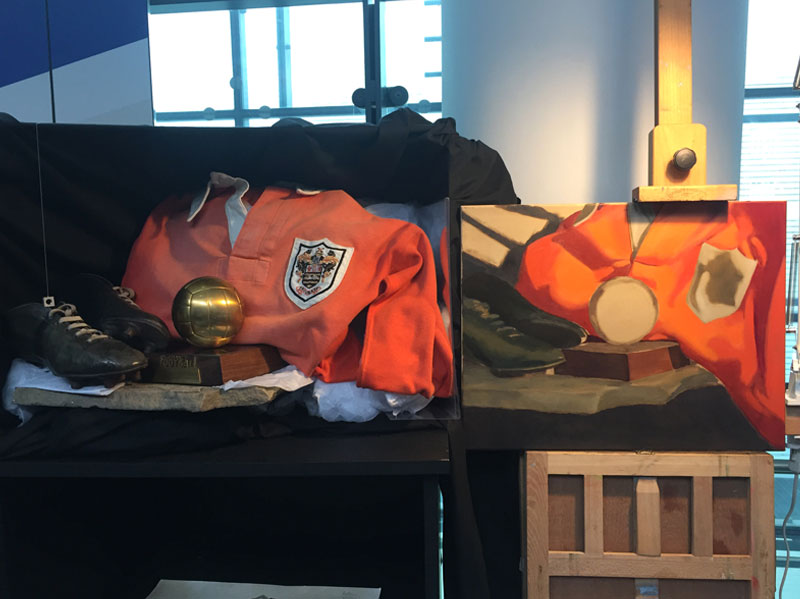 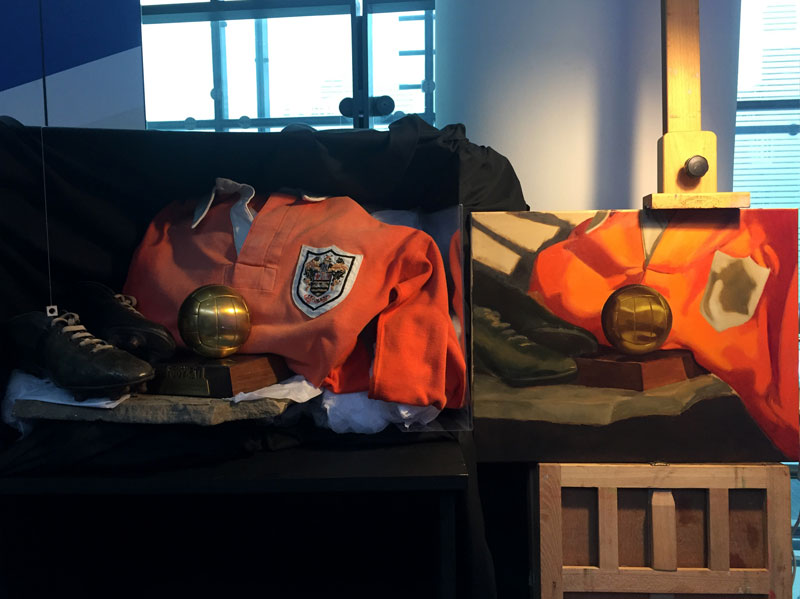 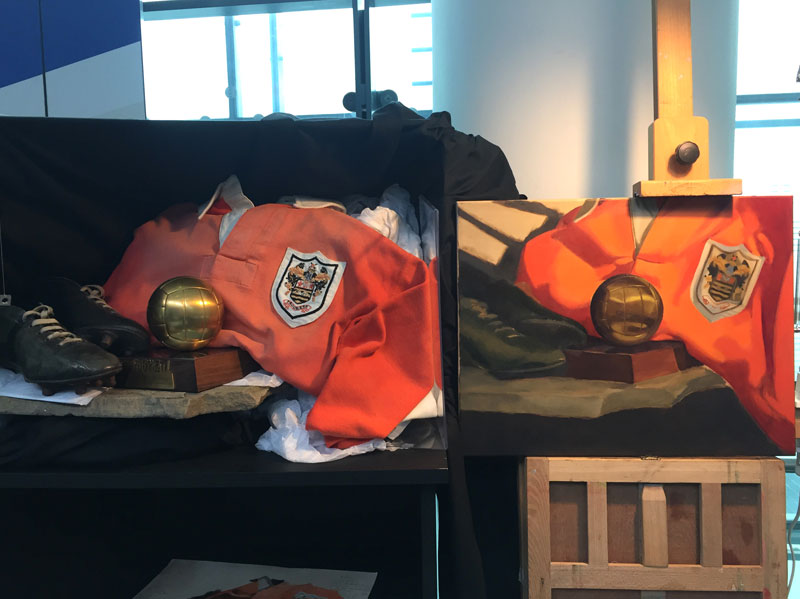 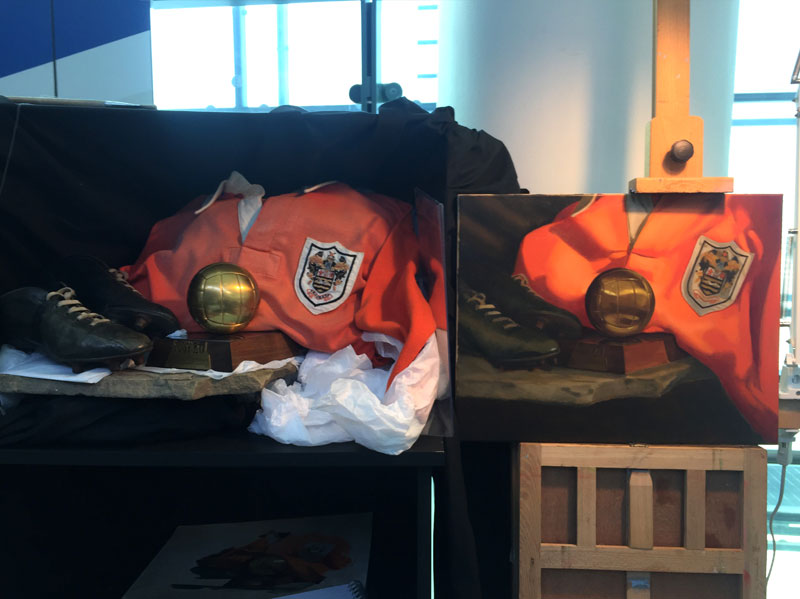 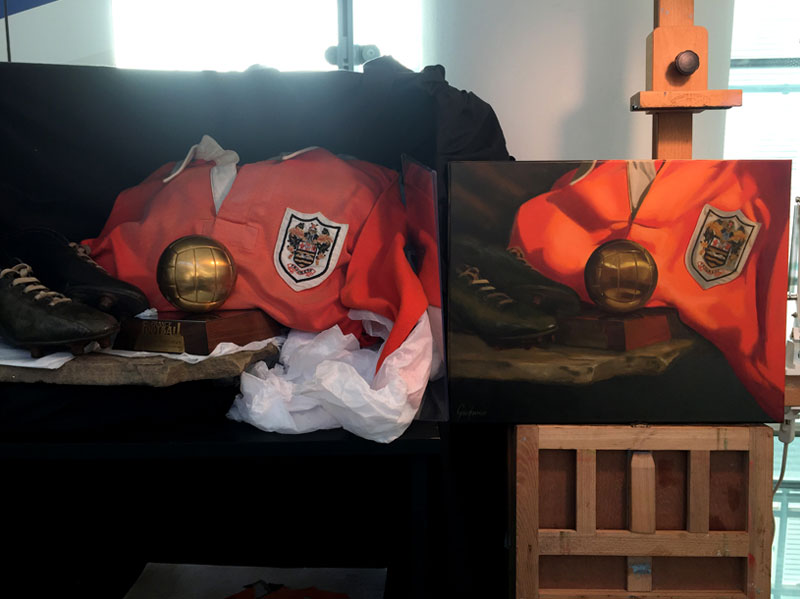 I’m delighted with the finished painting and thoroughly enjoyed the experience of being artist-in-residence. The staff, volunteers and visitors to the National Football Museum made me feel really welcome and it was a pleasure to meet so many interesting people.

Here you can see a retro-style highlights reel of the residency created by the brilliant National Football Museum team: 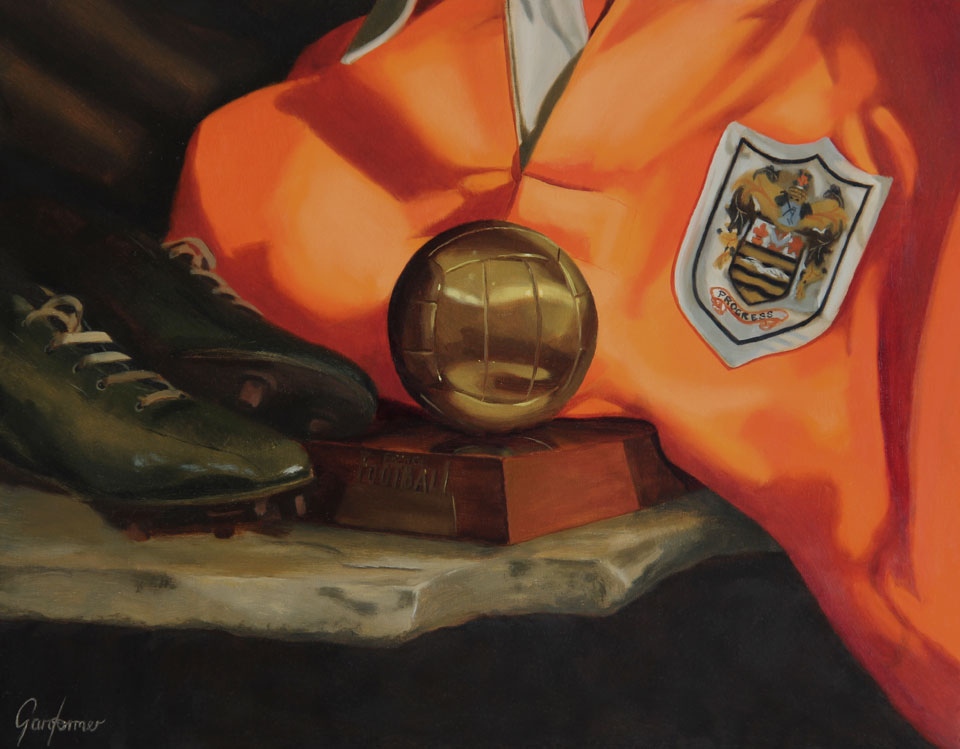 Notes  |  Painted entirely from life on an artist’s residency in the National Football Museum, Sir Stanley Matthews Still Life features the match worn boots and shirt from the legendary 1953 FA Cup Final as well as the player’s Ballon d’Or trophy from 1956.

The Sir Stanley Matthews Still Life painting is part of the artist’s Football is Still Life project which explores the themes and narratives associated with historic and retro football memorabilia and fan cultures.

Gary explains: “I was a keen collector of football memorabilia growing up and I love the memories these often simple artefacts can conjure up. Every item that I’ve painted resonates with certain football fans and takes them back to a time, a season or a memory of a particular match or player.”

“The array of items and the colours associated with different football teams are great fun to paint and make for interesting still life compositions when approached in a realist way. I’ve especially enjoyed the paintings where I’ve used chiaroscuro to create a sense of drama.”

The majority of the oil paintings were painted from life using the sight-size technique and so far they feature football shirts, boots, collectables, pin badges and rosettes.

20% (£15) of every print sale will be donated to the Sir Stanley Matthews Coaching Foundation to help support the brilliant work they carry out in the memory of one of football’s greatest ever players.

The Sir Stanley Matthews Coaching Foundation was formed in 2000 and helps give young people access to sports through providing grants to train more sports coaches and partnering with sports organisations to put on training sessions for young people.

Since it was founded the charity has already helped over 500,000 young people all over the world to enjoy sport, completing projects across the UK and in Uganda, Ghana and India. 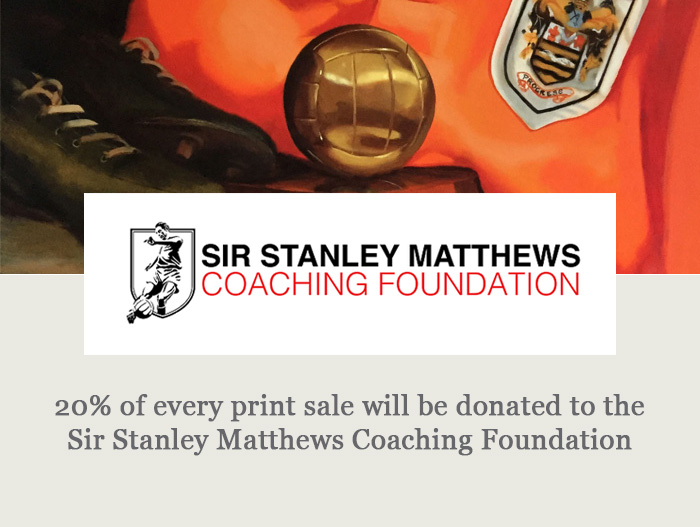